Angular calls lifecycle hook methods on directives and components as it creates, changes, and destroys them. 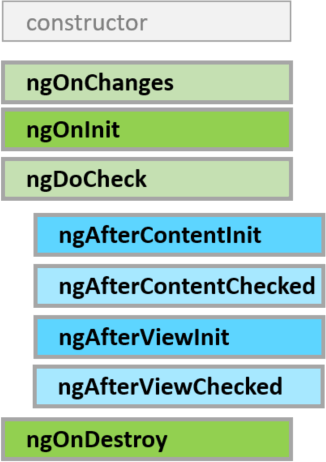 A component has a lifecycle managed by Angular.

Angular creates it, renders it, creates and renders its children, checks it when its data-bound properties change, and destroys it before removing it from the DOM.

Angular offers lifecycle hooks that provide visibility into these key life moments and the ability to act when they occur.

A directive has the same set of lifecycle hooks, minus the hooks that are specific to component content and views.

Directive and component instances have a lifecycle as Angular creates, updates, and destroys them. Developers can tap into key moments in that lifecycle by implementing one or more of the lifecycle hook interfaces in the Angular core library.

No directive or component will implement all of the lifecycle hooks and some of the hooks only make sense for components. Angular only calls a directive/component hook method if it is defined.

After creating a component/directive by calling its constructor, Angular calls the lifecycle hook methods in the following sequence at specific moments:

The interfaces are optional for JavaScript and Typescript developers from a purely technical perspective. The JavaScript language doesn't have interfaces. Angular can't see TypeScript interfaces at runtime because they disappear from the transpiled JavaScript.

Fortunately, they aren't necessary. You don't have to add the lifecycle hook interfaces to directives and components to benefit from the hooks themselves.

Angular instead inspects directive and component classes and calls the hook methods if they are defined. Angular finds and calls methods like ngOnInit(), with or without the interfaces.

Nonetheless, it's good practice to add interfaces to TypeScript directive classes in order to benefit from strong typing and editor tooling.

Other Angular sub-systems may have their own lifecycle hooks apart from these component hooks.

3rd party libraries might implement their hooks as well in order to give developers more control over how these libraries are used.

The live example demonstrates the lifecycle hooks in action through a series of exercises presented as components under the control of the root AppComponent.

They follow a common pattern: a parent component serves as a test rig for a child component that illustrates one or more of the lifecycle hook methods.

Here's a brief description of each exercise:

The remainder of this page discusses selected exercises in further detail.

The PeekABooComponent demonstrates all of the hooks in one component.

You would rarely, if ever, implement all of the interfaces like this. The peek-a-boo exists to show how Angular calls the hooks in the expected order.

This snapshot reflects the state of the log after the user clicked the Create... button and then the Destroy... button. 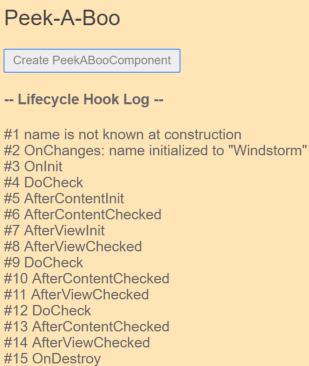 The constructor isn't an Angular hook per se. The log confirms that input properties (the name property in this case) have no assigned values at construction.

Had the user clicked the Update Hero button, the log would show another OnChanges and two more triplets of DoCheck, AfterContentChecked and AfterViewChecked. Clearly these three hooks fire often. Keep the logic in these hooks as lean as possible!

The next examples focus on hook details.

Go undercover with these two spy hooks to discover when an element is initialized or destroyed.

This is the perfect infiltration job for a directive. The heroes will never know they're being watched.

The sneaky spy directive is simple, consisting almost entirely of ngOnInit() and ngOnDestroy() hooks that log messages to the parent via an injected LoggerService.

You can apply the spy to any native or component element and it'll be initialized and destroyed at the same time as that element. Here it is attached to the repeated hero <div>:

Adding a hero results in a new hero <div>. The spy's ngOnInit() logs that event.

The Reset button clears the heroes list. Angular removes all hero <div> elements from the DOM and destroys their spy directives at the same time. The spy's ngOnDestroy() method reports its last moments.

The ngOnInit() and ngOnDestroy() methods have more vital roles to play in real applications.

Use ngOnInit() for two main reasons:

Experienced developers agree that components should be cheap and safe to construct.

Don't fetch data in a component constructor. You shouldn't worry that a new component will try to contact a remote server when created under test or before you decide to display it. Constructors should do no more than set the initial local variables to simple values.

An ngOnInit() is a good place for a component to fetch its initial data. The Tour of Heroes Tutorial and HTTP Client guides show how.

Remember also that a directive's data-bound input properties are not set until after construction. That's a problem if you need to initialize the directive based on those properties. They'll have been set when ngOnInit() runs.

You can count on Angular to call the ngOnInit() method soon after creating the component. That's where the heavy initialization logic belongs.

Put cleanup logic in ngOnDestroy(), the logic that must run before Angular destroys the directive.

This is the time to notify another part of the application that the component is going away.

This is the place to free resources that won't be garbage collected automatically. Unsubscribe from Observables and DOM events. Stop interval timers. Unregister all callbacks that this directive registered with global or application services. You risk memory leaks if you neglect to do so.

Angular calls its ngOnChanges() method whenever it detects changes to input properties of the component (or directive). This example monitors the OnChanges hook.

The ngOnChanges() method takes an object that maps each changed property name to a SimpleChange object holding the current and previous property values. This hook iterates over the changed properties and logs them.

Here's the sample in action as the user makes changes.

The log entries appear as the string value of the power property changes. But the ngOnChanges does not catch changes to hero.name That's surprising at first.

Use the DoCheck hook to detect and act upon changes that Angular doesn't catch on its own.

Use this method to detect a change that Angular overlooked.

This code inspects certain values of interest, capturing and comparing their current state against previous values. It writes a special message to the log when there are no substantive changes to the hero or the power so you can see how often DoCheck is called. The results are illuminating:

While the ngDoCheck() hook can detect when the hero's name has changed, it has a frightful cost. This hook is called with enormous frequency—after every change detection cycle no matter where the change occurred. It's called over twenty times in this example before the user can do anything.

Most of these initial checks are triggered by Angular's first rendering of unrelated data elsewhere on the page. Mere mousing into another <input> triggers a call. Relatively few calls reveal actual changes to pertinent data. Clearly our implementation must be very lightweight or the user experience suffers.

The AfterView sample explores the AfterViewInit() and AfterViewChecked() hooks that Angular calls after it creates a component's child views.

Here's a child view that displays a hero's name in an <input>:

The AfterViewComponent displays this child view within its template:

The following hooks take action based on changing values within the child view, which can only be reached by querying for the child view via the property decorated with @ViewChild.

The doSomething() method updates the screen when the hero name exceeds 10 characters.

Why does the doSomething() method wait a tick before updating comment?

Angular throws an error if the hook updates the component's data-bound comment property immediately (try it!).

The LoggerService.tick_then() postpones the log update for one turn of the browser's JavaScript cycle and that's just long enough.

Notice that Angular frequently calls AfterViewChecked(), often when there are no changes of interest. Write lean hook methods to avoid performance problems.

Consider this variation on the previous AfterView example. This time, instead of including the child view within the template, it imports the content from the AfterContentComponent's parent. Here's the parent's template:

Notice that the <my-child> tag is tucked between the <after-content> tags. Never put content between a component's element tags unless you intend to project that content into the component.

Now look at the component's template:

The <ng-content> tag is a placeholder for the external content. It tells Angular where to insert that content. In this case, the projected content is the <my-child> from the parent.

AfterContent hooks are similar to the AfterView hooks. The key difference is in the child component.

The following AfterContent hooks take action based on changing values in a content child, which can only be reached by querying for them via the property decorated with @ContentChild.

No unidirectional flow worries with AfterContent